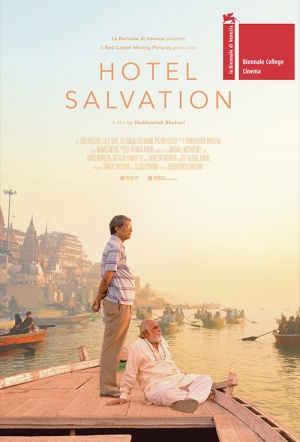 An old man drags his busy son to Varanasi so that he may die and attain salvation there in a comedy about death that, at heart, is a delightful, poignant celebration of life. Shubhashish Bhutiani's debut feature.

"Daya Kumar (Lalit Behl) believes that his end is near, so he tells his family that he wishes to die in the holy city of Varanasi, on the banks of the Ganges. The stubborn old man drags along his reluctant adult son Rajiv (Adil Hussain) and they check into the Hotel Salvation, where people come to die. But once there, Daya gets his lust for life back, making new friends with the other "dying" residents. Daya and Rajiv are forced to reconnect – both to each other and to the world around them." (Sydney Film Festival)

Winner of the UNESCO Enrico Fulchignoni Prize for the film that best represents the values of peace and human rights, 2016 Venice Film Festival
2016102 minsIndiaHindi with English subtitles
ComedyDramaWorld Cinema

Highly satisfying in many senses: audio-visually, emotionally and spiritually.

A leisurely, wise and ultimately affecting meditation on the benefits of letting go...

The film has feeling, warmth, wisdom and locations gorgeous with history.

A dextrous Indian drama... replete with wry humour, cheeky visual gags and an obsession with the paradox of celebrating life on the edge of death.

This highly impressive debut considers mortality with a wry compassion that's rare for such a young director.

The filmmakers make the most of a tiny budget here.

An enjoyable, thoughtful comedy about dying, freedom and family ties.