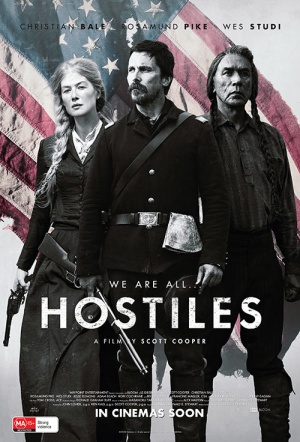 Christian Bale escorts a dying Cheyenne war chief and a young widow across treacherous terrain in this western from the director of Black Mass.

In 1892, legendary Army Captain (Bale) reluctantly agrees to escort a dying Cheyenne war chief (Wes Studi) and his family back home to tribal lands. Making the harrowing and perilous journey from New Mexico to the grasslands of Montana, the former rivals encounter a young widow (Rosamund Pike) whose family was murdered on the plains. Together, they must join forces to overcome the punishing landscape, hostile Comanche, and vicious outliers they encounter along the way.

Hostiles is the latest example of how the genre of the western has changed and modernised in deeply interesting ways.

"Hostiles" ultimately falls back on the same one-dimensional archetypes, depicting Native Americans either as ruthless savages or as stoic sages, with nothing in between.

Cooper's western may be too meditative for some, but its grit, beauty and honesty are too potent to ignore.

A flawed, but interesting drama.

Hostiles acknowledges that American history is steeped in blood and hatred but still searches for signs of hope arising from the ashes of countless atrocities.

A mournful, sorrowful, persistently powerful Western set in a world of beauty, tears and blood.

A finely crafted Western which doesn't flinch from portraying the horrors inflicted during that violent era, and which boasts an astounding performance from Christian Bale.

No doubt Joe and Rose's stories are interesting and compelling, but there persists this nagging feeling that their characters are somewhat co-opting this story... and Hostiles tests the patience of its audience.