At least it doesn't have Disney singing.

It's an age old story. Young child, usually male, is being groomed to take over in his father's footsteps, most often involving the family business. And he doesn't want too. He has dreams of his own and trying to achieve that aim is a rite of passage.
This time, the 'boy' in question is EB the rabbit and he doesn't want to be the Easter Bunny. He wants to be a drummer in a rock band.
With the heir AWOL, Carlos the Head Chick in charge of production, starts planning his coup to take over Easter. Voiced by Hand Azaria giving his crazy Latino accent yet another airing.
One star goes to Russell Brand as the voice of EB. Russell has got to be one of the stranger looking actors around, but there's no denying his voice was perfect for the bunny.
Another star is for the music. At least it was rock for a parent to tap their feet too.
Half a star goes to the visual feast that was the Easter Island chocolate factory.
I took Master 9. His verdict was liked the music, movie was just ok. When the lollies in the packet are more interesting than the ones on the screen, then that says something. 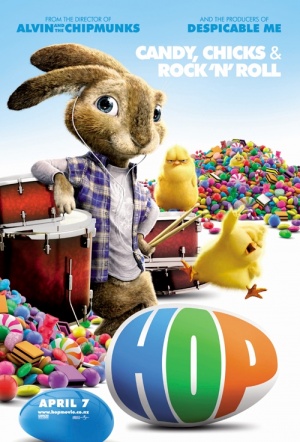