Hoodwinked Too! Hood vs. Evil 3D 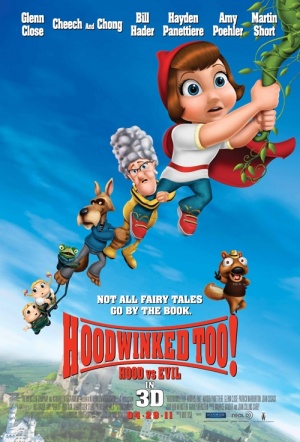 3D animated sequel to 2005's Hoodwinked! This time Red (voiced by Hayden Panattiere from Heroes) is training in the group of Sister Hoods, when she and the Wolf (voiced by Patrick Warburton, who played David Puddy in Seinfeld) are called to examine the sudden mysterious disappearance of Hansel and Gretel.

Less a movie than a ill-advised lab experiment in which classic children's stories are injected with Bond-movie stylings, inane wisecracks and martial-arts mayhem, this manic misfire takes storybook revisionism to ever more irritating ends.

There are a few nods to other films - Star Wars and Silence of the Lambs being the most obvious, but there's little for the adults in the audience to appreciate here.

While it seems there's no getting away from this marketing aesthetic, the resemblance at times to a video game is far, far too acute.

Hansel and Gretel are this movie's breakout stars, but it's not enough to make Hoodwinked Too feel like anything but a storybook hurled straight at your head.

One of the most obnoxious and least necessary animated films of the century thus far.

It raises the question of who the movie is for in the first place: Kids have seen much better animation in other films, and it's hard to imagine too many grown-ups ready to smile and nod at yet more smirking takes on famous moments from "Scarface" and "The Silence Of The Lambs."