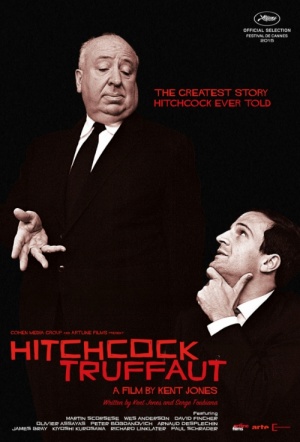 Heavily composed of archival footage, this feature delves deep into the filmmaking mind of Alfred Hitchcock – locked in discussion with legendary French director François Truffaut (The 400 Blows). These interviews expose Hitchcock as a master craftsman of cinematic suspense.

In 1962 Hitchcock and Truffaut locked themselves away in Hollywood for a week to excavate the secrets behind the mise-en-scène in cinema. Based on the original recordings of this meeting - used to produce the mythical book Hitchcock/Truffaut - this film illustrates the greatest cinema lesson of all time.

As far religious tomes on cinema go, Hitchcock/Truffaut ranks up there with the most essential. The 1966 publication, resulting from a series of interviews with Hitchcock conducted by French New Wave director François Truffaut, is the basis for Kent Jones’ engaging, though not terribly revealing documentary.

For all his bankability, Hitch was underappreciated until this study came along. Jones vibes off that idea, turning Truffaut's enthusiasm into an honourable act of reclamation.

A tribute to a pioneering act of cinephilia, cinema criticism and living ancestor worship.

A rigorous and entertaining look at how Hitchcock managed to deliver his own delicate and dark obsessions in a package that thrilled audiences all over the world.

Kent Jones' doc on the groundbreaking interview book gets you drunk on Hitchcock's films again. Nirvana for movie lovers.

The fact is that Hitchcock made some of the poorest movies of his career after "Hitchcock/Truffaut'' vaulted him to the top of the pantheon - but you wouldn't know it from this documentary, aimed at newcomers to Hitchcock's work.

Will be a top draw wherever films about filmmakers are welcome.