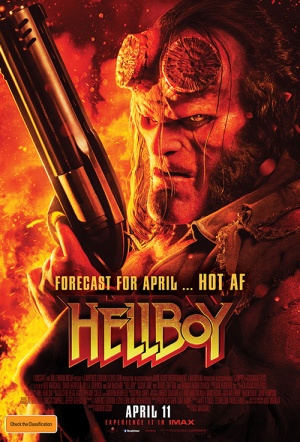 Hellboy (David Harbour, Netflix's Stranger Things) heads to England to defeat Merlin's consort and Nimue the Blood Queen (Milla Jovovich) in this reboot of the superhero film series. But their battle will bring about the end of the world, a fate he desperately tries to turn away.

It’s damn near impossible to set aside Guillermo del Toro’s 2004 and 2008 Hellboy films when watching this reboot. If one somehow could, this new effort would likely be considered an utter stinker anyway. A mess of studio attempt at teenage-friendly 'tude, constantly disappointing CGI, leaden performances and generally unenthusing action adds up to the sort of desperate misfire writers reach for in order to give context to the next one churned out of the sausage factory (yes, this could be the new Van Helsing).

It's two hours long but feels like an eternity, lurching incoherently from one noisy set-piece to another.

"The end is coming," Hellboy's dying friend says near the beginning, and I was already thinking, "Oh yes, please."

For all the badass attitude and the CGI mini-apocalypses he strides through, this Hellboy is lacking. He is more of a Heckboy: a banal action-movie figure without the unexpected likability of his previous iteration.

Expecting bugger all, I still came out of this Hellboy feeling let down. This is a lazy and demonstrably inferior remake of a film that was a true original.

... a few good gore gags and a monster or two can't disguise the dearth of imagination on display here....

Plenty of shock and gore, and David Harbour is more than worthy to wear the horns. But this is a reboot in need of a reboot.