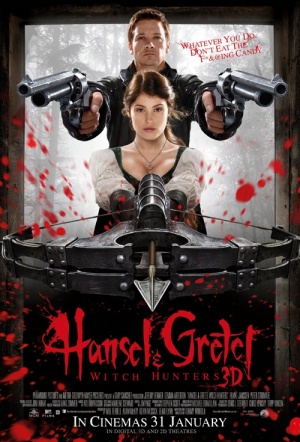 Grown-up and fiercely skilled, the siblings are hell-bent on witch retribution. But as the notorious Blood Moon draws near and a group of witches led by the evil sorceress Muriel (Famke Janssen) prepare a ritual sacrifice of innocent children, the pair encounter evil beyond anything they’ve ever hunted. Co-stars New Zealand's pure-bred stunt-mistress Zoe Bell (Death Proof) as one of the witches with a bounty on her head.

Rarely provokes any strenuous eye-rolling, it also can't drum up even the slightest interest in the fate of its characters, let alone suspense.

There isn't much swashbuckling chemistry between Mr. Renner and Ms. Arterton, and the script doesn't give them enough of the witty lines that can elevate these types of movies to must-see status.

For all the perspiration in jazzing up an old yarn, there's not a whiff of originality in how Wirkola engages with the perverse pleasures enshrined by the Grimm brothers.

All that's missing is a genuine sense of wit.

The grim heroes don't have a nuance or more than a hint of emotion between them, and the same goes for the film around them.