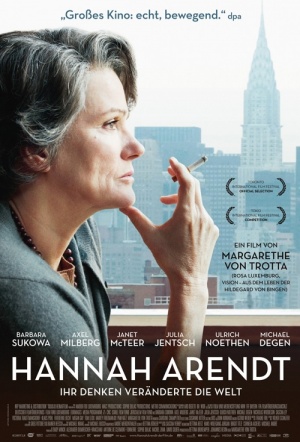 Barbara Sukowa (Europa) is German-Jewish philosopher and political theorist Hannah Arendt, who was sent by The New Yorker to cover the trial of Nazi war criminal Thomas Eichmann. Her resulting text, A Report on the Banality of Evil, is met by a wave of criticism when it theorises that anyone might be capable of evil. This biopic is also an examination of the lives of New York’s leading intellectuals amid the stark political climate of the '50s and '60s.

"Chronicling Arendt's visit to Jerusalem in 1961 to cover the trial of Adolf Eichmann, one of the architects of the Nazis' genocidal 'Final Solution' during World War II, German auteur Margarethe von Trotta dramatises the process by which Arendt began to formulate what would be her most lasting, and controversial, contribution to contemporary political thought: the "banality of evil" - evil not as diabolical intent but as unthinking, almost offhanded ignorance of the consequences of one's actions. Using footage from the actual Eichmann trial and weaving together an involving narrative that spans three countries, von Trotta turns the often invisible passion of thought into immersive, dramatic cinema." (Toronto Film Festival)

All signs point toward Margarethe von Trotta’s Hannah Arendt being a bit of tough sell: its deep immersion in philosophy, politics, and a subject who, for viewers not particularly well-read in history (i.e. me), might not generate immediate interest. But while the film is incredibly - and passionately - talky, it isn’t some stuffy academic lecture, but an absorbing, stirringly intellectual biopic that manages to elucidate an influential, complex figure with clarity and intelligence.

Feels like a movie stuck in another era, stolid and rote, more of an outline for a dramatic treatment than the real thing.

A movie of one billion cigarettes, Hannah Arendt is about moral reason, not personality.

Arendt was a writer of long books and a maker of complex arguments, so the two hours of [this] ardent and intelligent film about her are bound to feel somewhat superficial.

This is a formal and pedagogic production, but worthwhile nonetheless.

Von Trotta's style is pretty stolid... Nonetheless, it's good to see a film that gets its narrative charge from the ferment of intellectual debate. It's a rare breed.

There’s nothing fancy or modern to distract from the portrait of one of the most important thinkers of the century.

There's plenty of zip and vibrancy in this account... but it gravely underestimates its audience's stomach for complexity.