I have now seen Guardians of the Galaxy twice. And after watching it again, I've realized Guardians is more than spectacular action-packed Sci-Fi fun. It's a masterpiece and Marvel's most entertaining film since The Avengers. Chris Pratt is Peter Quill, a pilot from Earth who calls himself Star Lord. Peter steals a precious orb that belongs to the evil Ronan while dancing to his Awesome Mix Tape. Bradley Cooper and Vin Diesel voice wanted criminals Rocket Raccoon & Groot, the Han Solo and Chewbacca of the movie. Wrestler Dave Bautista is Drax the Destroyer, seeking vengeance after Ronan kills his wife and daughter. And Zoe Saldana is Gamora, a green alien assassin. Together, they're the frickin' Guardians of the Galaxy. The first big blockbuster movie by James Gunn, the director of underrated gems Slither and Super. Guardians of the Galaxy is like a hilarious blend of Star Wars, Indiana Jones and Cowboy Bebop. This gang of misfits knock it out of the park, especially Chris Pratt and Bradley Cooper. Guardians of the Galaxy also has one of the most amazing soundtracks ever. If there's one bad thing I can say about this awesome movie, Ronan isn't a very good villain. Despite that, Guardians of the Galaxy is damn near perfect. 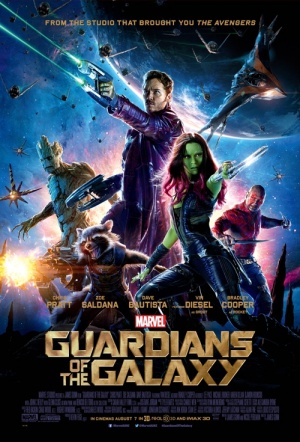