Grandmas are supposed to be helpful, bake cookies and give warm hugs, not swear, threaten, smoke dope, verbally and physically assault people, while conniving to raise money for an abortion.

What happens when the grandmother you turn to for help is a hippie lesbian, poetess author, radicalised non-motherly type who shredded her credit cards, is broke and estranged from her own daughter and most other people she knows? A story like this could easily become a fractured disaster except for the extraordinary acting of Lily Tomlin as grandma. Instead, it shines brightly as a multi-layered post-feminist comedic drama that snubs its nose at several social and moral issues in a highly entertaining manner.

The plotline is simple. Angelic-looking Sage is pregnant and the procedure is booked for later that day. She cannot tell her mother, so she arrives on her cantankerous grandma’s doorstep for money, and the whole film is the story of one day in the intersecting lives of three generations of women. With echoes of Thelma and Louise, it’s a modified road film in which they encounter various characters in their hunt for the $630 that would save Sage from unwanted motherhood. But grandmas are supposed to be helpful, bake cookies and give warm hugs, not swear, threaten, smoke dope, verbally and physically assault people, while conniving to raise money for an abortion. Its when you admit to having such stereotype expectations that the ageist, feminist, and materialist layers of this film leap right out at you.

Despite its modest production values, the film is well cast with an intelligent script and loads of eccentric humour. This mix allows it to explore relationships that have been damaged by being outside the heterosexual mainstream of middle-class parenting. The bigger picture of course rests on the irony of generational shifts in feminism, but this may be lost on younger audiences. Sage has never heard of names like Betty Friedan and Simone de Beauvoir, and Grandma is shocked to learn that the first-edition book prints by these seminal feminists have gone from being worth “thousands” to practically nothing. And after all the battles that were fought and won since the 60s, men are still ignorant oppressors who leave girls like Sage to fix their own problems. Despite their family dysfunctions, Sage’s manic mother and lesbian grandma close ranks when needed. In today’s turbulent discourse about alternative family units, this story reminds us that what matters most is the people you love and who love you, regardless of age, gender, or sexuality.
0 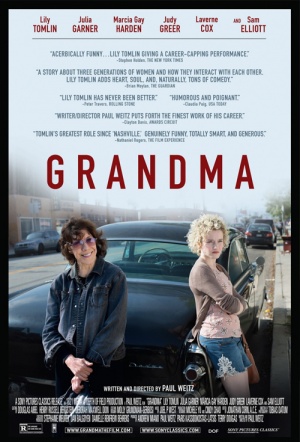