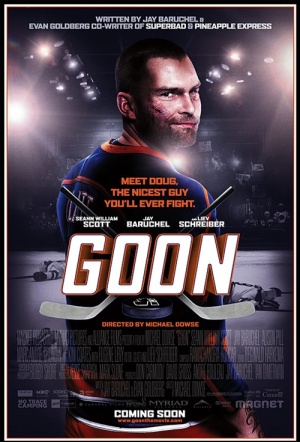 The co-writers of Pineapple Express take on the sport genre with this comedy about a terribly nice fellow who joins a minor league ice-hockey team as an 'enforcer', a position whose sole job is to protect his teammates and intimidate opponents. Based on a true story.

Sean William Scott (American Pie) stars as Doug - one of the nicest, though not particularly smart, guys around. After going to an ice hockey game, getting into an altercation with one of the players and knocking him out, he is offered a position in the home team as their muscle. Doug's natural ability with his fists ("touched by the fist of God") conflicts with his nice guy personality but proves to be a winning combination as the formerly struggling team begins to climb up the rankings...