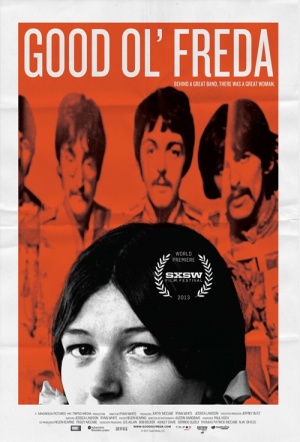 Documentary on The Beatles' loyal, long suffering secretary Freda Kelly, who gives a front row seat to the biggest pop culture phenomenon of the 20th Century. Kelly, a shy Liverpudlian teenager when she was asked to work for a local band, would work with them through their entire 10 years together.

"On their 1963 Christmas record, The Beatles give thanks to 'Good Ol’ Freda!' in Liverpool, their devoted secretary and friend. History notes that The Beatles were together for 10 years, but Freda Kelly worked for them for 11. Many people came in and out of the band’s circle as they grew to international stardom, but Freda maintained her meaningful role because of her unfaltering loyalty and dedication. In one of few documentaries with the support of the living Beatles, Freda tells her stories for the first time, offering an insider perspective on the evolution - advances and setbacks, breakthroughs and challenges - of the beloved band that changed the music industry." (SXSW Festival)

This particular fifth Beatle is lovely working-class company, and White’s revelation-free, nostalgia massage of a film works the archivals with genuine fondness.

A generic jaunt down memory lane.

Kelly is good company. Her reminiscences, filled with disarming details, paint a touching picture of the extended family at the heart of the phenomenon.