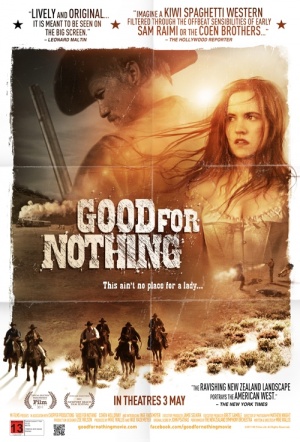 Escaping her past, a young English woman (newcomer Inge Rademeyer) immigrates to the West. After a gunfight breaks out in a saloon, Isabella is snatched away by a rugged outlaw (Holloway). With the Sheriff mistaking her for an accomplice, a bounty is placed on her head and she is forced to partner up with her captive...

After premiering at the Santa Barbara International Film Festival, The Hollywood Reporter described it as "a Kiwi spaghetti western filtered through the offbeat sensibilities of early Sam Raimi or the Coen brothers."

Good for Nothing / Reviews

A droll New Zealand parody with a tone so deadpan it becomes laugh-out-loud funny.

The ravishing New Zealand landscape portrays the American West in Mike Wallis’s Good for Nothing, a slender movie of humble, welcome charms.

Lively and original... [it's a] cheerfully eccentric Western and I hope it finds the audience it deserves here in the States.

Imagine a Kiwi spaghetti western filtered through the offbeat sensibilities of early Sam Raimi or the Coen brothers and you’ve pretty much got the picture that is Good for Nothing.