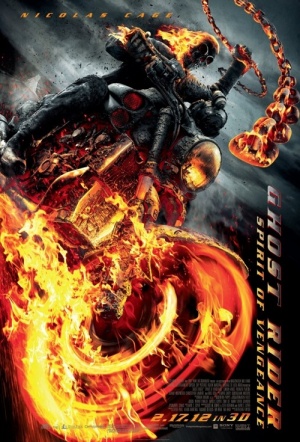 Nicolas Cage returns as Marvel Comics' Ghost Rider. Also stars Idris Elba (The Wire) and Ciarán Hinds (There Will Be Blood). From the directors of Crank.

Set several years after the first film, Johnny Blaze (Cage) is in self-imposed exile in Eastern Europe – lamenting his curse as the devil's bounty hunter - when he is recruited by Moreau (Elba). A member of a secret sect of the church, Moreau asks Blaze to use his powers to to protect a mother and son from the devil (Hinds).

"This is a completely original interpretation of Ghost Rider," says Cage. "It's not a sequel [to 2007's Ghost Rider] at all. Everything about it is different including the origin sequence. They'll see new camera moves, high adrenaline, it's like extreme sports. I think the movies going to be an incredibly wild ride."

Weighted down for long stretches in the middle, as it starts to treat its own religious hokum plotline with undue seriousness.

Funny in all the wrong places and long at 95 minutes. Cage might be on fine psychotic form, but the flaming skull barely manages a sizzle this time around.

Has some redeeming qualities, including the presence of Idris Elba as the obligatory good guy, who encourages Johnny to get Danny into the protective custody of a religious order.

One look at the dreadful mess will turn your whisper into a primal Cage scream: MAKE THIS MOVIE STOP!

Undone by increased expectations, as promising more only makes it feel they are somehow delivering less.

A surprisingly underpowered excursion into Marvel's mad world by Neveldine and Taylor. More purgatory than hellfire.

The charismatic Idris Elba debuts in a key role... Yet instead of elevating the franchise, Ghost Rider: Spirit Of Vengeance ends up squandering even more potential.