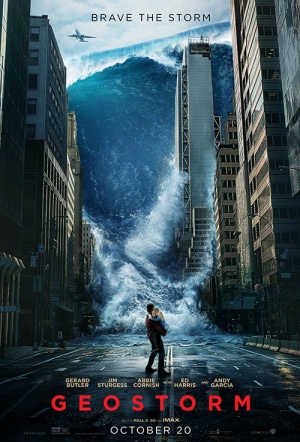 In the near future, climate control satellites malfunction, causing disasters across the globe. The end of the world looms and the only solution is to send Gerard Butler into space. Independence Day and Stargate co-writer/producer Dean Devlin's directorial debut.

When catastrophic climate change endangers Earth's very survival, world governments unite and create the Dutch Boy Program: a world wide net of satellites armed with geoengineering technologies designed to stave off the natural disasters. After successfully protecting the planet for two years, something is starting to go wrong. Two estranged brothers are tasked with solving the program's malfunction before a world wide Geostorm can engulf the planet.

"Geostorm" uses digital technology to lay waste to a bunch of cities and hacky screenwriting to assault the dignity of several fine actors.

We have been sold a false bill of goods.

"Geostorm" has a more clever premise than it needs to get to its ultimate goal of trashing some of our planet's nicest places. But the results are still mostly dull-witted.

Big, dumb and boring, it finds the co-writer of Independence Day hoping to start a directing career with the same playbook - but forgetting several rules of the game.

...doesn't outstay its welcome and hits its quota of spectacle and thrills without ever threatening to do anything too new...

Not quite the geostinker people were expecting, but the outlook is far from favourable.