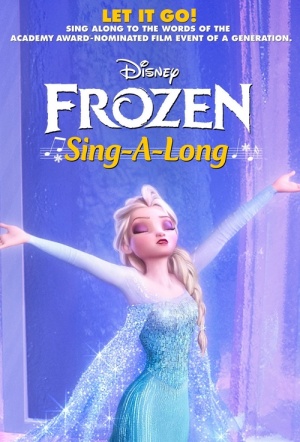 Disney's comedy adventure based on The Snow Queen fairytale, released here with words on screen to help you sing along. Fearless optimist Anna (voice of Kristen Bell) sets off - with rugged mountain man Kristoff and his loyal reindeer Sven - to find her sister, whose icy powers have trapped the kingdom of Arendelle in eternal winter. Encountering Everest-like conditions, mystical trolls and a snowman named Olaf, Anna and Kristoff battle the elements in a race to save the kingdom.

This always enjoyable tale of mysterious magic, imperiled princesses and square-jawed men of action proves longer on striking visuals than on truly engaging or memorable characters.

A solid addition to the canon. Catchy tunes will have you humming, but the hunt for the next The Little Mermaid continues...

Has both showtunes and darkness, but most satisfying is a formula-defying finale that successfully subverts the fairytale status quo.

Following closely in the footsteps of 2010's Tangled.. hits many of the same beats, and finds some of the same freshness in a complicated family dynamic.

A modern twist on a classic Disney formula with lashings of dry wit and old-school romance.

This smartly dressed package injects a traditional fairy tale with enough contemporary attitudes and female empowerment touches to please both little girls and their moms.

The plot's all over the place, but there are a lot of laughs and some strong action beats along the way.