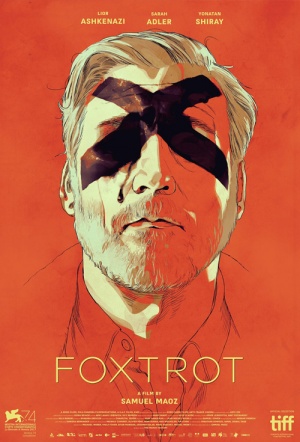 The death of an upper-class Israeli couple's soldier son sparks a series of absurd events in this drama that won the top award at Venice Film Festival.

"Unable to find solace in the well-meaning condolences of their extended family or the empty patriotic platitudes of bureaucrats, Michael (Lior Ashkenazi, Footnote) spirals into anger, only to subsequently experience one of life's unfathomable twists — a twist that can only be rivaled by the surreal military experiences of his son. Moving from the grieving parents' apartment to the remote military post where Jonathan (Yonaton Shiray, A Tale of Love and Darkness) was stationed, Foxtrot shows us precisely how much damage can ensue when young soldiers, barely able to tell their toe from a trigger, experience boredom, privation, and loneliness." (Toronto International Film Festival)

Brilliantly constructed with a visual audacity that serves the subject rather than the other way around, this is award-winning filmmaking on a fearless level.

"Foxtrot" leads us a sorry dance, with irreproachable skill, but sometimes you long for it to break step, to quicken, and to breathe.

A movie that builds into a devastating indictment of a nation, shock by shock, brutal moment by brutal moment.

It is a fierce, urgent, unflinching picture.

It's an extraordinary film, far from easy, ultimately thoughtful and hard to forget.

Samuel Moaz's Israeli drama about life, war and grief Is a deeply resonant achievement that takes a piece out of you.

No matter what you're expecting, "Foxtrot" is not the film you expect it to be. It's better.

Bold modernist cinema at its most harrowing.

The twists and reversals in Maoz's screenplay are bold enough to alienate or even anger. But his cast and crew are all on the same page, in on the same joke, and the strange engine hums.