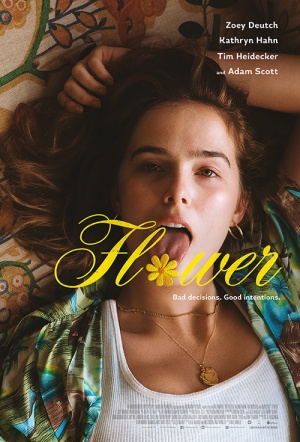 "Seventeen-year-old Erica Vandross (Deutch) isn’t like most teenage girls. When school’s out, for example, she and her two best friends seduce older men in order to extort money from them ... Much of Erica’s rebellious attitude stems from the abandonment of her biological father, who’s in jail and has left her similarly free-spirited mother (Kathryn Hahn) to raise Erica alone. Everything changes, however, when mom invites her new beau (Tim Heidecker) and his overweight and fresh-out-of-rehab son (Joey Morgan) to move in with them, giving Erica an unexpected connection to the “hot older guy” (Adam Scott) she and her friends obsess over at the local bowling alley." (Tribeca Film Festival)

Flower is redeemed only by Zoey Deutch's magnetic performance, which would be star-making if in the service of a better vehicle.

In the end, Flower buckles underneath its attempt at balancing its plethora of tones, ultimately abandoning the emotional journey of its central character in favour of a tidier ending.