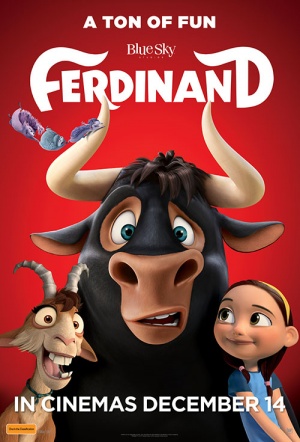 Animated comedy from BlueSky Studios (Rio, Ice Age) based on the kid's book The Story of Ferdinand by Munro Leaf - the story of a bull (voiced by John Cena) who would rather smell flowers than fight in bullfights.

As Ferdinand grows big and strong, his temperament remains mellow, but one day five men come to choose the "biggest, fastest, roughest bull" for the bullfights in Madrid and Ferdinand is mistakenly chosen.

This story has been previously adapted by Walt Disney (Ferdinand the Bull, 1938). It won the Academy Award for Best Short Subject (Cartoons).

Munro Leaf’s 1936 pacifist parable picture book The Story of Ferdinand gets the animated movie makeover. The script expands the tale of the sensitive Spanish bull, but sticks to its pacifist themes, delivering a fun fable for modern family audiences.

[It] strains at times, but in what’s been an underwhelming year for big-studio animation, it’s the best of the bunch: sincere, likable, surprisingly funny, and overall true to its source material.

... a movie of both substance and silliness. Olés all round.

Nothing mould-breaking, but unassumingly enjoyable.

None of the story is surprising but it has charm and humour, and lots of colour and movement for the tots.

McKinnon's goat character is in constant and hilarious conversation with her many selves but the awkward handling of the slaughterhouse issue will upset some kids.

Manages to squeak by with enough charming set-pieces and amusing sight gags to compensate for a stalling storyline.

It's often dark, sometimes whacky, but true to the heart of the book and beautifully brought to life in modern Spain.