The Fast gets more FURIOUS!

"The Fast And The Furious" franchise has been a surprising beast to many. Producing commercially successful films since 2001, the series has reached number 6 and appears to be gaining more speed instead of slowing down.


Which is fitting, considering the franchise name.


"Furious 6" picks up where "Fast 5" leaves off, with a race between series stalwarts Dominic Toretto (Franchise favourite, Vin Diesel) and Brian O'Connor (Paul Walker).
We quickly pick up the crew (Jordana Brewster, Tyrese Gibson, Chris Bridges, Sung Kang and Gal Ghadot all returning from "5") as they are roped in by Luke Hobbs (Dwayne "The Rock" Johnson also returning) to help him in his quest to catch International criminal, Owen Shaw (Luke Evans).


The catch being that a character thought dead, returns in the form of Dom's love, Letty (Michelle Rodriguez).


With over-the-top action that feels like homage to that of the 80's, it takes the law of physics and throws it at us with a "Don't Care" attitude that only makes the film more enjoyable.
The storyline is predictable and full of cliches and corny lines that used to lace the scripts of old, but it only adds to the formula that the audience thought was the bad taste that came with the rise of "real" stories.
And with the returning characters and cars, these top off a sundae of action movie goodness that makes "Furious 6" one of the most fun watches in the last year of film.


What "Furious 6" does best, is it doesn't try to be any more than it is, which is a furious beast that is fast becoming the new action film franchise that will spawn sequel after sequel of awesome action overload.


Did I also mention the fantastic stinger? 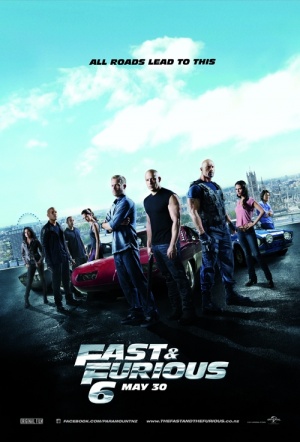