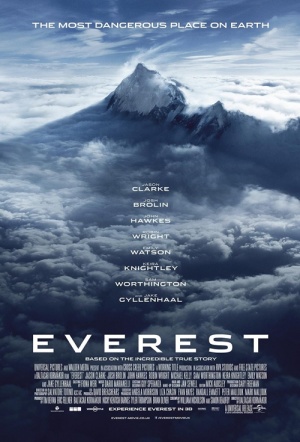 Mountaineering thriller, based on the 1996 Mt Everest disaster where eight climbers were caught in a vicious blizzard in the most unforgiving of environments. Jason Clarke (Rise of the Planet of the Apes) is Kiwi mountaineer Rob Hall, Keira Knightley plays his pregnant wife who waits at home in Christchurch for updates, Jake Gyllenhaal is American guide Scott Fischer. Co-stars Emily Watson, Josh Brolin, Martin Henderson, Robin Wright and Sam Worthington.

Blunt, businesslike and — as it begins its long march through the death zone — something of an achievement.

The craft of this film is astonishing...

It never makes the crucial leap from the screen into your bones.

A frustrating movie in many ways... it doesn’t quite deliver the edge-of-your-seat thrills that many were hoping for...

A disaster movie in the old Hollywood sense of the term, but it doesn't feel like one. And that's a good thing.