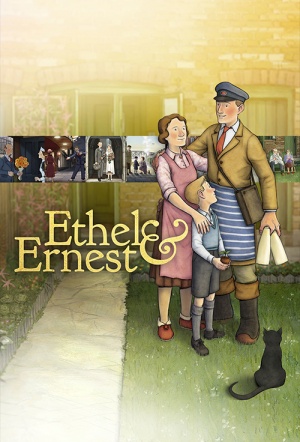 "There's a canny social and political history of Britain traced through their experiences and amusingly expressed through decades of gentle crossfire between Labour Dad and Tory Mum. A lifelong milkman with few complaints, Ernest keeps a close eye on world events – the rise of Hitler, the arrival of the fridge, the phone and the television, and the actions of successive governments – while Ethel, a former lady's maid, would rather sleep than watch the moon landing on TV and bristles at any suggestion that their little household in Wimbledon might be considered working class." (New Zealand International Film Festival)

The storytelling can feel a bit plodding, but Jim Broadbent's exuberant Ernest and Brenda Blethyn's timid, upwardly mobile Ethel give the marriage a touching intimacy and warmth.

Ethel & Ernest is the kind of contemplative grown-up animation that the Japanese have been making for decades but the British have never fully embraced. That's our loss because the format can make for deceptively powerful filmmaking.

It's an engaging film, but it leaves you with a feeling that there might be a deeper, darker, more specific story yet to be told.

If the first 15 minutes of Up were set in London, animated by Raymond Briggs and stretched into a feature-length film, it might look a bit like this.