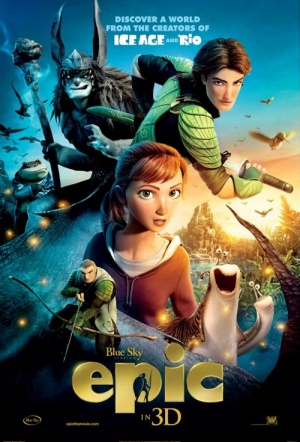 Animated adventure from Blue Sky Studios (Ice Age). In a miniature world deep in the forest, inhabited by Leaf Men and cute critters, a battle between good and evil is taking place that will determine the future of their world. Voice cast includes Amanda Seyfried, Beyoncé Knowles and Colin Farrell.

When a teenage girl (Seyfried) finds herself transported into this secret universe, she lends a hand in the fight against the Spider Queen and her army. Based on the Leaf Men and the Brave Good Bugs kids' book by William Joyce.

If this is all familiar territory even to film-literate young children, it's nonetheless executed with professionalism and a few dashes of panache.

This is big on action and small on originality. Gorgeous visuals aside, Epic is resolutely kiddie fare.

So generic it might as well come in a black-and-white box: Animated Adventure TBD.

As beautiful as it is, fatally lacking in visceral momentum and dramatic edge.

The emotional connection that should have the crowd cheering wildly for the heroes and booing the villains never clicks in.

With its secret, magical worlds and legions of evil-battling leafy warriors, there's plenty here to engage young audiences of both genders.

Not a crossover classic, this has enough wit and charm to entertain both big and little people.

Epic is heavy on celebrity voices and light on imagination.