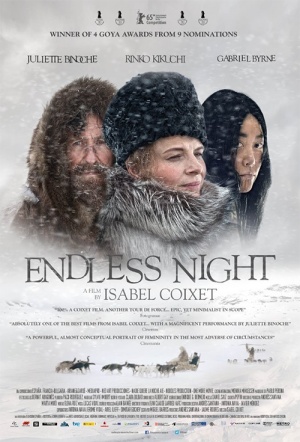 "Greenland, 1908. Josephine (Binoche), the self-confident and bold wife of famous Arctic explorer Robert Peary, embarks on a dangerous journey in pursuit of her husband who is seeking a route to the North Pole. But Josephine is also naïve and ignores warnings from experienced polar travellers about the onset of winter. At great sacrifice the expedition reaches Peary's base camp. Josephine refuses to go home and wants to spend winter in the hut. Only the young Inuit woman Allaka (Kikuchi), who lives in an igloo and knows about the cold, stays with her. As the long nights draw nearer, Josephine realises she has more in common with this woman from a different world than she thought." (Berlin International Film Festival)

Juliette Binoche adds grace and talent to the enterprise, but she battles against the elements - both literally in the dark arctic winter and symbolically in the production.

It is a pretty flimsy piece of work, a butterfly of whimsy, which comes near to being broken on the wheel of its own ponderousness.

It's less a movie than a lecture – the woman behind the woman who chased the man who went to the Pole. Except she didn't.

Less of a polar bear than a polar mongrel.