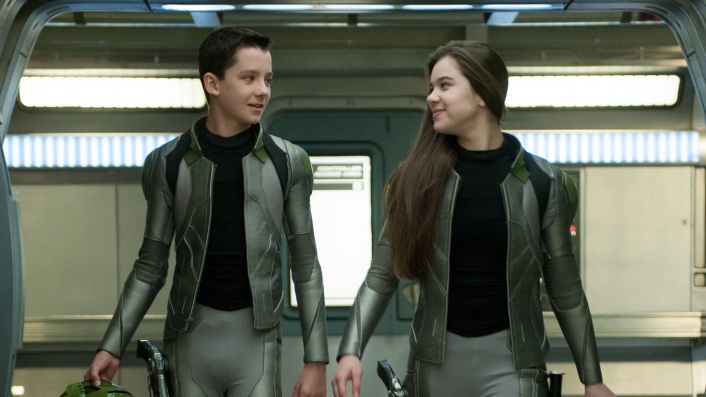 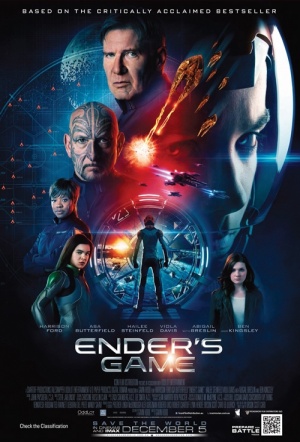 Adaptation of the beloved science fiction novel starring Harrison Ford, Ben Kingsley and Abigail Breslin. 70 years after a brutal war with an alien race, young Andrew 'Ender' Wiggin (Asa Butterfield, Hugo) is selected for Battle School to hone his military skills and defeat them once and for all. More

To prevent future attacks by the Formics, hostile insect-like aliens who killed tens of millions when they attempted to colonise Earth, the Battle School was established to find the world's most talented young strategists. Led by the esteemed Colonel Graff (Ford), the school's job is to enlist and train the world's best tactical minds - one of whom, the shy but brilliant Ender, quickly establishes himself as humanity's greatest hope. Trained in combat and space warfare, Ender is also ruthlessly psychologically manipulated as the Battle School attempts to mould him into their ultimate weapon against the Formics.

Orson Scott Card's novel, published in 1985, is the first in a series of twelve. The first two are considered amongst the most influential science fiction of the 1980s.

It’s been a long time coming, but Orson Scott Card’s revered sci-fi novel has finally hit the big screen. Much of the wait likely had to do with waiting for technology to make an adaptation possible – lifelike zero gravity and deep space manoeuvres being critical to the film. Yes, it’s a bit like Gravity, which outshines Ender’s Game visually in some departments. But since Gravity doesn’t have aliens, massive space battles and kids pummelling the crap out of each other, that’s a bit of an unfair comparison.

An impressive, thought-provoking astro-adventure that benefits from the biggest screen available.

Like its hero, Ender’s Game relies on brains more than brute force. An absorbing portrait of Lord Of The Flies-style morality housed in imaginative sci-fi casing.

It falters once the actual war begins: Ben Kingsley shows up as a Maori warrior with the weirdest imaginable accent, the final battle is uninvolving, and there’s an unconvincing upbeat coda. Ender’s Game ends up being fitfully engaging and endearingly odd.

Childhood can be tough in movies, but rarely do screen children suffer for our sins as they do here.

The movie's apocalyptic finale indicates that it's bitten off considerably more than it can chew in terms of ideas, but it looks good, and the story rattles along.

If only adapter-director Gavin Hood's movie had been tempered with craft and care and wasn't such a blunt instrument, one that seems designed as a delivery system for CGI derring-do instead of the heartbreaker it should be.

It admirably avoids many of the pitfalls of adapting this book, but seems to have lost some of the life and pace as well.

Ender's Game is available to stream in Australia now on Stan and Google Play and Apple TV and Foxtel and Binge and Prime Video Store.