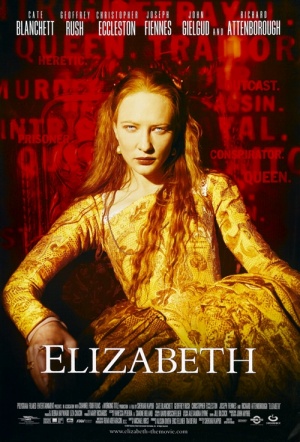 Cate Blanchett won the BAFTA and Golden Globe for her portrayal of Queen Elizabeth I in this historical biopic, based on Elizabeth's rise to the throne and early reign in the mid-1500s. Also stars Geoffrey Rush as her enigmatic Master of Spies, Joseph Fiennes as her lover, and Richard Attenborough as her adviser.

Elizabeth's ascension comes in the wake of her predecessor's (Queen Mary I - played by Kathy Burke) brutal campaign against Protestant England and attempt to restore Catholicism as England's single faith. With many out to unseat her, the 'heretic' Queen confronts a divided British, aggression from the Scottish Mary of Guise (Fanny Ardent), and pressure to marry.

Blanchett, Rush and director Shekhar Kapur returned for a sequel in 2007, The Golden Age.