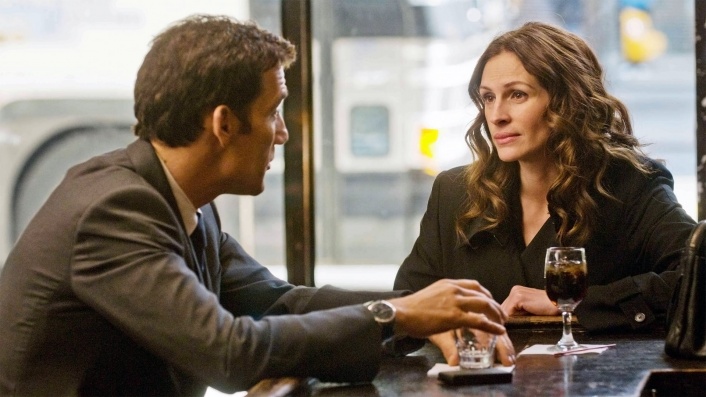 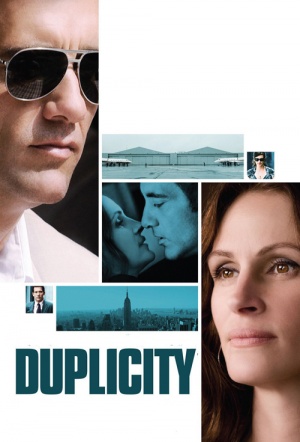 Two corporate spies for rival pharmaceutical companies join forces to scam their bosses and manipulate the market for a new medical innovation. Adding to the intrigue, the spies, played by steely-eyed Brit Clive Owen and perennial box office winner Julia Roberts are former lovers, so things will get spicy.

Tom Wilkinson and Paul Giamatti play the rival pharmaceutical company bosses (Giamatti replaced Billy Bob Thornton in the film). The film is being written and directed by Tony Gilroy, who also made highly rated George Clooney legal drama Michael Clayton as well as writing the screenplays of the Bourne films.

Comedy seems to have liberated Gilroy, who directs Duplicity with the high gloss and fleet-footed hustle of a golden-age Hollywood craftsman.

Smart, droll and dazzling to look at and listen to, writer-director Tony Gilroy's effervescent, intricately plotted puzzler proves in every way superior to his 2007 success "Michael Clayton."

Whatever the onscreen dilemma for Clive Owen's Ray and Julia Roberts' Claire, for us, it's a no-brainer. This slick and persuasive crime thriller has so much chemistry and chutzpah; we're hooked from the start

Does suffer from trying to be a little too clever in places, and will lose audience to that, and the ending is a little ho-hum, but overall, an enjoyable romp.

The movie is fun, with plenty of intrigue and suspense that will have audiences clutching at their arm rests.

The chemical combustion just isn't there between Julia and Clive, and you can't help wondering if Gilroy wrote this with George Clooney in mind. Still, a glamorous, diverting escapade that over-30s in particular can enjoy.