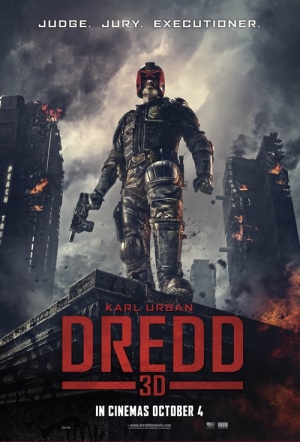 3D re-adaptation of the violent sci-fi comic set in a post-apocalyptic future where police are given the powers of judge, jury and executioner. It's just another day upholding the law in overcrowded Mega-City One for Judge Dredd (Kiwi Karl Urban), partnered with a rookie cop (Olivia Thirlby). Responding to a seemingly regular call-out - to a 200-level slum - the pair are forced to take on a heavily-armed gang dealing in the reality-altering drug SLO-MO.

With a script by Alex Garland (28 Days Later, Sunshine) that stays true to the comics (unlike Sylvester Stallone’s 1995 helmet-off version). The Judge Dredd character first appeared in 1977, in British comic 2000 AD.

Grungy, compact and delightfully violent, Dredd wants to hit you as hard as it can. The sequel may be the movie you really want, but for now, justice has been done.

The impressively lean script by Alex Garland (28 Days Later) is shorn of almost all superfluity beyond a few dud Schwarzeneggeresque kiss-offs, while Anthony Dod Mantle's sensational widescreen cinematography harkens back to the tension-inducing inventiveness of early John Carpenter.

Every so often there's a suggestion that a police state may actually be a lousy idea, but this thought dies even faster than the disposable characters.

In a world of compromised adaptations, Dredd is something of a triumph.

Smartly cast and with a sharp team behind the scenes, there is no good reason why Dredd 3D is such a clunk-headed action picture.

Pitched at the right level to please original fans, but still slick and accessible enough to attract new ones, Dredd 3D feels like a smart and muscular addition to the sci-fi action genre.

There was much to dread about this new iteration of Dredd, but it's a solid, occasionally excellent take on the character, with Urban's chin particularly impressive.

The stylish sci-fi film makes some eye-popping and unexpected choices that add up to one heck of a fun film.

Mostly a bunch of flatly staged bits of action shot against anonymous backgrounds.