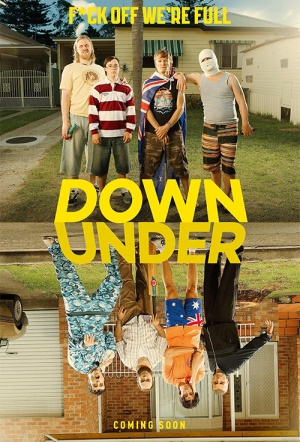 Australian black comedy, set during the aftermath of the Cronulla riots, follows two carloads of hotheads from both sides of the fight destined to collide. Sincere, though misguided, intent gives way to farcical ineptitude as this tale of ignorance, fear and kebab-cravings unfolds.

Says writer-director Abe Forsythe, "There is nothing more satisfying than getting people to laugh at something they feel like they shouldn’t be laughing at. Comedy is the best way to say something meaningful."

The comic elements sit rather uncomfortably next to the graphic violence, so the film does not play as funnily as it is probably intended.

Down Under is a cause for celebration, skewering notions of masculinity and nationalism in a balls-out narrative expertly balancing absurdism and tragedy.

...there are a number of laugh-out-loud moments and the cast and crew do a uniformly strong job executing a difficult premise.

There is plenty of knockabout comedy – and a lot of violence and in-your-face language – but it's an entertaining film with a serious intent.

An hour-and-a-half of meandering aggression, which seems like it won’t peak. When it finally does, it’s an anti-climax.

After drawing serious thematic heat from its arresting opening, Down Under loses temperature slowly, frustratingly and wastefully.