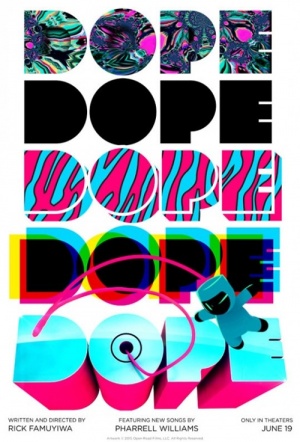 A geek (newcomer Shameik Moore) from a tough neighbourhood in Los Angeles tries to find his place in academia in this coming-of-age tale. However, one night at an underground party sends him in a wildly different direction - one that will make him the dopest dude around. Co-stars The Grand Budapest Hotel's Tony Revolori, Zoë Kravitz and rapper A$AP Rocky.

"Malcolm is a high school geek with a high-top fade, carefully navigating life in The Bottoms, one of the toughest neighborhoods in Inglewood, California. He and his fellow outcasts share a voracious appreciation for all things '90s hip-hop, opting to sport Cross-Colours and Z. Cavariccis at the risk of being clowned at school. He dreams of attending Harvard, but first he has to make it home every day. When a drug dealer takes a shine to Malcolm and invites him to his birthday party, Malcolm’s crew is swirled into a hilarious blender of offbeat characters and bad choices where redemption can only be found in Bitcoin." (Sundance Film Festival)

Move over Ferris Bueller, high school has a new king and the high school movie genre has a new heavyweight. Meet Malcolm and his two friends. Three self-professed high school geeks with an obsession for ‘90s hip hop who are weeks from graduating having navigated the complex dilemmas of life in a modern high school world and urban gang war landscape.

Famuyiwa ... doubles down on an applying-to-Harvard satire that both upends demographic expectations while insisting (at times a bit strenuously) that we all aim a little higher.

Shoves disparate genre elements together as if pulling jigsaw puzzle pieces from a half-dozen different boxes, and if the finished work isn't quite convincing, it's still fun to look at.

It's about kids who we're generally not asked to care about: a cast almost entirely made up of actors of colour.

In the end, just another unfunny grab bag of stereotypes. Don't believe the hype.

A crowd-pleaser from start to finish.