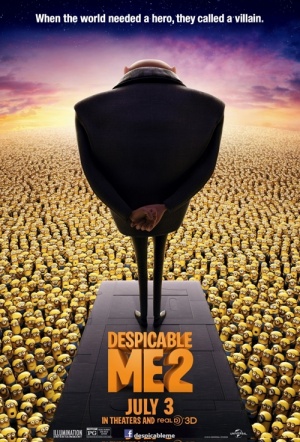 After Despicable Me (2010), Gru has retired from villainy and now lives a quiet life with his three adopted daughters Margo, Edith, and Agnes. But his domestic life takes an unexpected turn when he is recruited by Lucy Wilde (Wiig) and Silas Ramsbottom (Coogan) from the Anti-Villain League, a society dedicated to fighting crime on a global scale. In a unique position to get inside the mind of a super villain, Gru - along with assistant Dr. Nefario (Brand) and his minions - takes on the new threat: a tough, Mexican villain named Eduardo (Bratt).

While not quite as charming or unique as the original, comes awfully close, extending co-directors Chris Renaud and Pierre Coffin's delightfully silly sensibility to a bit larger universe.

The minions give good mayhem and the twig-armed animation’s lovely. Despite the coolest submarine-car since Bond’s Lotus Esprit, though, Despicable Me 2 is light on gadgets – and surprises, too.

Its repetitive qualities are beyond reproach. Every bit as amiable and disposable as its predecessor, it recycles everything from slapstick gags to its own voice cast.

Nothing here to challenge anything from the Pixar golden age, but Despicable Me 2 is a sweet-natured family film.

You can wish for a tighter plot, yet aside from the entirely useless 3D, there's little reason to be angry with Despicable Me 2.

While the new edition doesn't quite catch that inspired spark, there's still plenty to enjoy here courtesy of those zippy visuals and a pitch-perfect voice cast.

It falters in the middle and hesitates unnecessarily in setting up the love story, but Gru still has charm and kids will adore the Minions.