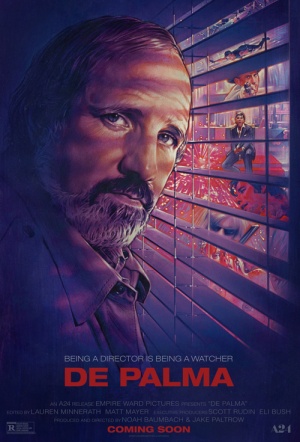 De Palma’s career started in the '60s and has included such acclaimed and diverse films as Carrie, Dressed to Kill, Blow Out, Scarface, The Untouchables, Carlito’s Way, and Mission: Impossible. Directors Baumbach and Jake Paltrow engage in a personal and candid discussion with De Palma, exploring not only his life and work but also his singular approach to the craft of filmmaking and his experiences navigating the film business, from his early days as the bad boy of New Hollywood to his more recent years as a respected veteran of the field.

In this highly entertaining documentary, directed by Noah Baumbach and Jake Paltrow, De Palma mounts a robust defence of the more contentious moments of his career, while also taking a few well-aimed potshots at the current state of the film industry.

So many documentaries about artists just want you to accept that their subject is an innovator. De Palma breaks it down and shows you why he is.

So revealing, and entertaining, that little is needed here other than the man, his opinions and some telling illustrations.

Could still benefit from some structural polish but a blast nonetheless.