Dawn of the Planet of the Apes 3D 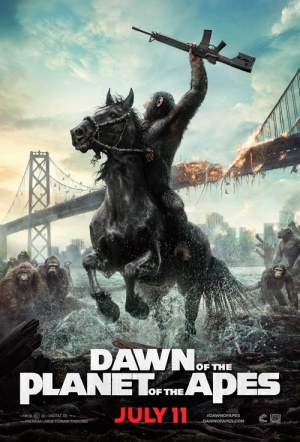 Set ten years on from the excellent Rise of the Planet of the Apes (2011), Caesar (Andy Serkis) attempts to maintain control within a growing clan of intelligent apes. Caesar's group is also under threat from a group of humans living in a San Francisco - survivors of the Simian virus.

A fragile peace is short-lived as both sides are brought to the brink of war, driven by violent elements within the ranks of each species. Helmed by Matt Reeves (Cloverfield, Let Me In), starring Jason Clarke, Gary Oldman and Keri Russell.

Dawn of the Planet of the Apes 3D / Reviews

This vivid, violent extension of humanoid ape Caesar’s troubled quest for independence bests its predecessor in nearly every technical and conceptual department.

Powered by the simmering, expertly sustained tension both between and within the two species.

It may lack its predecessor’s lofty ambitions, but once the bullets, spears and hairy fists start flying you’ll be too wrapped up to care.

This sequel delivers on its promise and leaves us wanting more – which we'll almost certainly get.

In the annals of sequels, Dawn is to Rise of the Planet of the Apes what The Empire Strikes Back was to Star Wars — it’s that much better.

Dawn of the Planet of the Apes 3D / Trailers