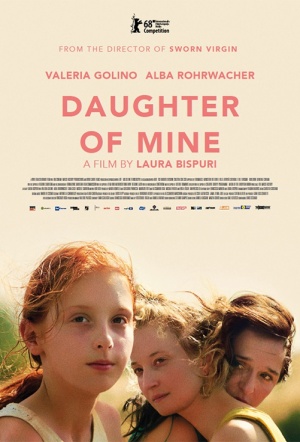 Laura Bispuri reunites with her Sworn Virgin star Alba Rohrwacher in this Sardinia-set story of a young girl torn between two mothers.

"Vittoria, a shy 10-year-old girl, spends the summer on the windswept Sardinian coast with her loving-but-overprotective mother Tina (Valeria Golino, Rain Man). Vittoria begins to suspect that the local party girl Angelica (Rohrwacher) is her actual birth mother, a revelation that upsets her innocent childhood existence. When financial difficulties force Angelica to leave town, she asks Tina if she can spend some time with Vittoria before she goes. Tina reluctantly agrees, setting off a dramatic summer during which the young Vittoria finds herself torn between two imperfect mothers." (Tribeca Film Festival)

Daughter of Mine / Reviews

The film renders each of Vittoria's mothers with such riveting and unvarnished empathy that you hardly even notice how their daughter is growing up before your eyes, stronger than the both of them.

Sidesteps all ambiguity, as the film reveals everything about its characters straight away...

There's a wonderful wildness to "Daughter of Mine," an electricity that feels untamable.

Central to the movie's full-bloodedness, though, when all pistons are working, are the richly felt portrayals from its trio of leads.

It feels like an outline, a general idea rather than an actual filled-out story.

Asks big questions and answers them fully, vividly and affectingly, without a trace of sentimentality.

Even when it trips up in its later stages, "Daughter of Mine" is a noble rarity, passionately involved in the exploration of oppositional ideas of motherhood not just as an abstract concept, but as a real and vivid, painfully sacrificial thing.

Two mothers, the birth mother and the adoptive one, battle for their 10-year-old daughter's affections during an emotionally heated Sardinian summer, in this beautifully acted and crafted drama.