Everybody loves a good laugh, but what makes us unashamedly burst out in shrieks of delight is purely in the eye of the beholder. Some people still find Adam Sandler funny (and relevant) while others find the rebooted canned laughter of early eighties American slap stick comedy the right fit for their sense of humour. It is all about taste and what one actually finds amusing. I find Will Ferrell amusing, and when he teams up with Marky Mark Wahlberg, then what you have is a couple of "goofs" who can actually make people laugh. They are opposite in almost every way and it is because of this extreme difference that their personalities gel with one and other.
Director, Sean Anders ( We're the Miller's) has reunited Ferrell and Wahlberg for the first time since their maiden outing together in the goofed up comedy 'The Other Guys'. Surprisingly, that film worked with the most bizarre casting coming together to produce a funny cinematic experience. 'Daddy's Home' has recreated this same experience with plenty of riotous events that will leave you with no choice but to laugh out loud while choking on a handful of popcorn. Brian Burns screenplay is nothing spectacular but it doesn't have to be as Ferrell revels in the moment, producing his trademark idiosyncratic 'fruitcake' performance. The funnyman is constantly on the receiving end of Wahlberg's more mucho act but it sets the scene for some memorable events. Ferrell's films are all to predictable but he does them so well that the fan's keep coming back for more. Marky Mark is proving versatile and doesn't seem to be afraid of creating his own style. He is comfortable in allowing Ferrell to take the lead and then with all the smoothness of a babies newborn bum, Wahlberg slides into his role, bouncing of the comedic turn of Big Willy's antics.
As the title refers, 'Daddy's Home' is primarily about fatherhood. Ferrell is the Step-dad, Brad Whitaker, who has longed to be a dad but because of an unfortunate incident, can no longer father his own. He gets his opportunity when he marries Sara (Linda Cardellini), a sheer beauty who has two children from a previous relationship. His dopey, almost childlike approach to his two step-children fuels the laughs from the very beginning. He is a man that loves his role and with each obstacle that the attention seeking brats throw in his way, it is met with positivity on every front. Brad's perfect world is turned upside down when the irresponsible biological father makes a visit. Dusty Mayron (Mark Wahlberg) is everything Brad is not. In a simple word, the man is cool. He knows everybody, makes friends easily and can do pretty much anything.
What follows is a riotous narrative of Step-dad versus dad as both Brad and Dusty go to great lengths to out do each other. The prize for the winner is Sara and the kids.
There are some truly great moments and throw in the dry humour of Thomas Haden Church as Leo Holt only adds flavour to an already delicious pie. A real standout was the well timed comments of Hannibal Buress whose presence is hard to ignore. His character, Griff, is likeable from the very appearance. His relationship with both Dusty and Brad is priceless and commands the audiences attention whenever he is in a scene.
'Daddy's Home' does exactly what it was supposed to do and that is to make people laugh. Director Sean Anders has delivered a thoroughly amusing film that allows its cast (especially Ferrell) to do their stuff. Relax and enjoy it. You will be rewarded. 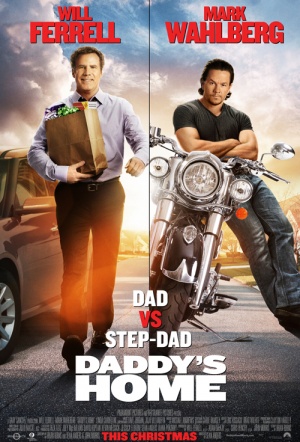