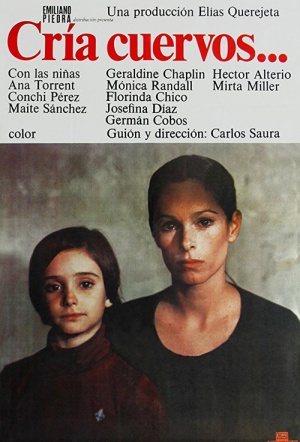 A winner at Cannes, this Spanish drama on childhood follows three orphaned sisters at a pivotal growing point in their lives as they adjust to their new guardians: a stern aunt and their handicapped grandmother.

"Here is one of the great films of our first decade – and one of the great film portraits of childhood full stop. Coming at the end of an era when every Spanish film worth its salt was an encrypted dispatch about life under Franco, Cría cuervos, shot the year of his death, beguiles with its evocation of a child’s imagination, and mysterious affinities between mother and daughter. Be warned: it famously leaves audiences as addicted as its young protagonist to the Spanish pop song ‘Porque te vas’." (New Zealand International Film Festival)

A richly shot, impressively acted film containing a powerful, bleak vision of both childhood and a repressive adult world.

The allusions are as gentle as they are smart.

It unfolds like a kind of morbid reverie, reverberating with strange frissons about what one generation passes to the next, and how even rebellion is a kind of heirloom.

The film is a masterpiece of form and technique, and Chaplin and Torrent are both outstanding.