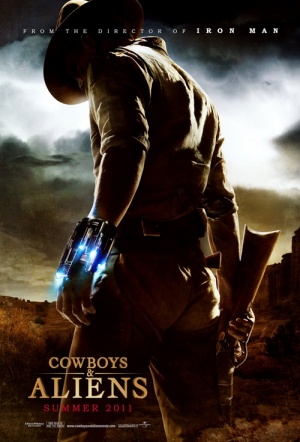 1873, Arizona, Old West USA. A stranger named Jake (Craig), with no memory of his past, stumbles into the hard desert town of Absolution. The only hint to his history is a futuristic shackle shackling his wrist. He's 'aint welcome – a fact made clear by the iron-fisted Colonel Dolarhyde (Ford).

Dolarhyde runs his town by fear. But Absolution is about to experience alien terror as it's attacked by marauders from the sky: screaming down with blinding lights and abducting the helpless one by one. Of course it's Lonergan, the stranger the city rejected, that is their only hope – the gunslinger slowly starts to remember who he is and realises he holds a secret that could give these cowboys a chance. He enlists the help of an elusive traveller (Wilde) and a posse of townsfolk, outlaws and Apache warriors.

While Cowboys & Aliens offers little in the way of sociological insight (except perhaps giving the white man a taste of his own resource-stealing medicine), it's still a ripping good ride.

Solid bordering on stolid. It’s Favreau in control again after Avengers advert Iron Man 2 - but given the possibilities, a mild, mild west. More horsing around and another set-piece or two might’ve helped.

Favreau wavers uncertainly between goofy pastiche and seriousness in a movie that wastes its title and misses the opportunity to play with, you know, ideas about the western and science-fiction horror.

Cowboys & Aliens has without any doubt the most cockamamie plot I've witnessed in many a moon.

A leaden mash-up of western and science-fiction elements that ends up noisy, grotesque and unappealing.

The key to its success lies in the determination by everyone involved to play the damn thing straight. Even the slightest goofiness, the tiniest touch of camp, and the whole thing would blow sky high. But it doesn't.

A simple entertainment in a summer of overcomplicated disappointments. Also much harder-edged than you may have expected.

Cowboys & Aliens is a frustrating film. Some individual scenes and set pieces are terrifically enjoyable, but that mash-up of genres won't allow one good solid story to develop. The western elements are too gimmicky, while the sci-fi yields nothing more than a pack of bad-guys.

You want cowboys and aliens in the same movie? This one's for you. If you want anything beyond what the title promises, look elsewhere. And that means even anything resembling a clever mash-up of established genres.