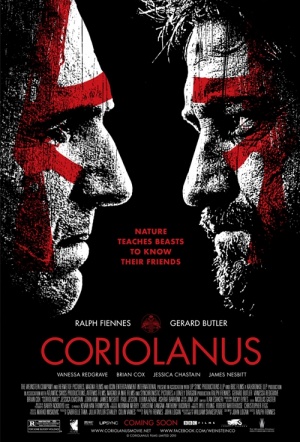 Fiennes is Coriolanus, a Roman war hero who under his mother's (Redgrave) influence makes a push into politics with his eye on the top position: Consul. After failing to connect with the common man, Coriolanus' rage angers the constituency leading to widescale riots. As the cause of the riots, he is ousted from Rome. Swearing revenge he allies with a former enemy (Butler) to avenge his former home.

In lesser hands, this could have easily been some seriously detestable John Wayne jingoism. But via Fiennes, the film is a spiky and complex counterweight to Hollywood sentiment and indie cynicism alike.

Then too there's the sheer pleasure of hearing these words spoken by an actor like Mr. Fiennes, whose phrasing is so brilliant, you might be tempted to close your eyes if his physical performance weren't equally mesmerizing.

A deeply, divisively political work, devoid of comic relief and short on endearing characters, its complex moral conflicts are as knotty as the verse.

Think "The Hurt Locker," which shares a cinematographer in Barry Ackroyd with no damage to the Bard's bruising poetry. Neat trick.

One of the pleasures of Fiennes' film is that the screenplay by John Logan ("Hugo," "Gladiator") makes room for as much of Shakespeare's language as possible. I would have enjoyed more, because such actors as Fiennes, Vanessa Redgrave and Brian Cox let the words roll trippingly off the tongue.

Ralph Fiennes directs and stars in Coriolanus as William Shakespeare's Rambo in a production that delivers heavyweight screen acting at its best.

Exciting, ironic, with assured direction, accomplished performances and the tension of topical themes, this is Shakespeare as relevant as you like it.

As played by Ralph Fiennes in his own cinematic adaptation of the play, Coriolanus' military genius makes him a figure of awe, but it's his near-absence of empathy that makes him terrifying.