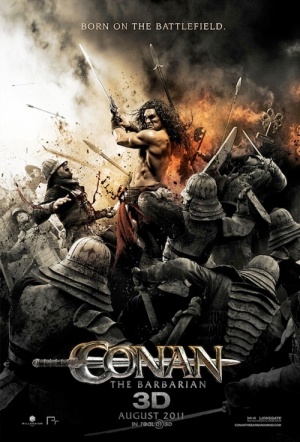 The tale of Conan the Cimmerian and his adventures across the continent of Hyboria. After his father is murdered and village destroyed, Conan (Jason Momoa, Game of Thrones) ventures into the world and survives as a thief, pirate, and warrior. On his path of wanton adventure and women, Conan eventually faces the warlord responsible for his tribe’s destruction.

This is a new adaptation of Robert E. Howard's mythology - not a follow-on from the Arnie-starring films that came out in the 1980s. This project has been ruminating for years with various filmmakers attached to the project, including Brett Ratner (X-Men: The Last Stand), the Wachowski brothers (Matrix) and Robert Rodriguez (Sin City). Eventually Marcus Nispel (Pathfinder) took the job, shooting the film in Bulgaria.

The film delivers hard-R escapism for 13-year-old intellects, aimed to satisfy those looking to rest their brains but not their ears.

While the effects are fine director Marcus Nispel does little to replace the unintentional humor of the original.

If swords, sorcery, pecs and FX get your bloodlust pumping, there’s fleeting fun to be had.

A brutal, crude, witless high-tech CGI contrivance, in which no artificial technique has been overlooked, including 3-D.

So fun it's barbaric. The squeamish should stay home, but the bloodthirsty will thrill as Conan the Barbarian butchers bodies and dialogue.

It may be ridiculous as all get-out, but the fact that the exaggeration is so irony free is charming in its own way.

Feels like a half-hearted revamp of virtually any of the Conan rip-offs that clogged up video-store shelves in the ’80s.