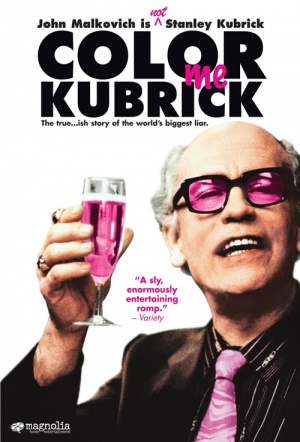 John Malkovich, in an astonishing & hilarious performance, plays real-life confidence man Alex Conway. In the 90s, when reclusive film director Stanley Kubrick was a largely heard but not seen figure, Conway rocked his way around London masqueraded as the filmmaker. His confident and flamboyant nature left few to suspect otherwise, and the ones that did were so embarrassed by being fooled they didn't alert the authorities.

The plot follows Conway's numerous incarnations as the revered auteur and subsequent con jobs, until he drunkenly confronts a NY Times theater critic at a restaurant ("I don't like what your newspaper wrote about me! I am NOT a recluse") which plants the seeds of his unraveling.

A sly, enormously entertaining romp based on the antics of real-life Brit conman Alan Conway who rooked his way around '90s London posing as Stanley Kubrick...

A straightforward enough jape on the one hand, Colour Me Kubrick is also a riddle wrapped in a mystery inside an enigma - all summed up in the perplexing person of John Malkovich, who gives perhaps his most flamboyant comic performance to datek...

A rather flat and drab picture that never finds it feet as an interesting story. Conway's frauds are presented as a string of vignettes in which, for the most part, the other characters are sordid and unlovely sorts.

Malkovich has plenty of fun in a particularly camp performance that mangles accents into a dozen different mid-Atlantic melanges. Yet at times he seems almost too big for the role...

A curiosity for Kubrick fans and a superior turn from Malkovich, but not as intriguing as it could have been...