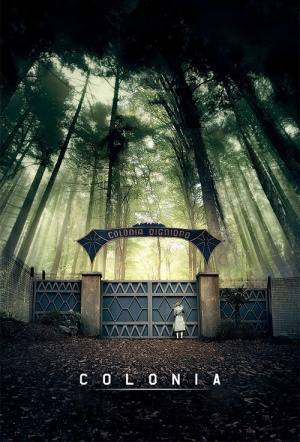 "Chile, 1973. Lufthansa flight attendant Lena (Watson) is in Santiago to visit her boyfriend, Daniel (Brühl), a talented graphic artist creating images in support of embattled President Salvador Allende. When Allende is violently ousted, General Augusto Pinochet's forces begin rounding up dissidents. Daniel is taken to the remote stronghold of Colonia Dignidad ("Dignity Colony"), home to a secret agricultural commune and crypto-fascist sect led by sinister minister Paul Schäfer (Michael Nyqvist). Daniel is interrogated and tortured, but feigns severe mental deterioration to stay alive. Valiant and wily, Lena travels to Colonia and offers herself up to Schäfer as a follower. She is determined to find and free Daniel — but first she must ensure that she herself can survive Schäfer's crushingly oppressive, viciously misogynistic practices." (Toronto International Film Festival)

Just might work as a glossy thrill ride for viewers oblivious to the actual events it haplessly trivializes.

This questionable historical thriller is a dictatorship of poor filmmaking.