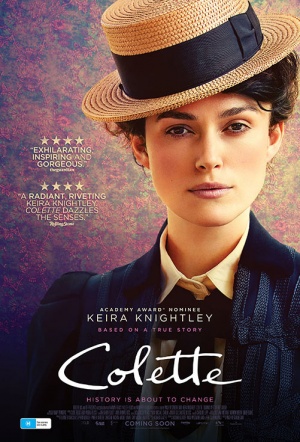 "Colette arrives from the countryside as a young bride to Willy (West) — an older, notorious literary entrepreneur — and she is immediately swept into flamboyant, libertine society. At Willy’s prompt, she takes pen to paper and invents the loosely autobiographical Claudine novels, which take Paris by storm. The character Claudine becomes a veritable pop-culture icon, but Colette does not, since Willy takes authorial credit. To reclaim her literary voice, Colette must set out for new transgressive adventures, sans Willy." (Sundance Film Festival)

Keira Knightly shines in this biopic about artist Sidonie-Gabrielle Colette, which is interesting but at times cliché-drenched.

As a story of a woman who eventually asserts her creative independence and fights for the artistic credit she deserves, Colette is more satisfying intellectually than sensually.

"Colette" ranks as one of the great roles for which Keira Knightley will be remembered.

Colette isn't intense on process, but it does illustrate well what might motivate a writer, how her unique spirit is stoked and developed.

Keira Knightley slips effortlessly into the evolution of Colette...

Knightley in particular makes a welcome return to the spotlight, reminding audiences of why she was once British period dramas' go-to-gal in the likes of Pride and Prejudice, Anna Karenina and The Duchess.

A radiant, riveting Keira Knightley meets every challenge the title role of French novelist Colette throws at her and turns this tale of a pioneering feminist into an exhilarating kick.

A safe but enjoyable take on the author's anything-but-safe early career.

... a delightful and finely-crafted piece of cinema. Clip ('The Toast of Paris') Clip ('You Could Write')