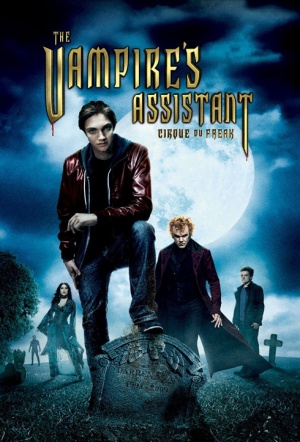 A fantasy-adventure, based on the popular series of books by Darren Shan, about a teenager who unknowingly breaks a 200-year-old truce between two warring factions of vampires.

16-year-old Darren (Chris Massoglia) was like most kids in his suburban neighborhood. But when he and his buddy stumble upon a traveling freak show, things begin to change inside Darren. That’s the exact moment when a vampire named Larten Crepsley (John C. Reilly) turns him into something, well, bloodthirsty.

Newly undead, he joins the Cirque Du Freak, a touring sideshow filled with monstrous creatures from a snakeboy and a wolfman to a bearded lady (Salma Hayek) and a gigantic barker (Ken Watanabe).

The Vampire's Assistant is too busy making impossible claims about just how spectacular its sequels will be to serve up a self-contained story with a satisfying finale.

The movie has good special effects and suitably gruesome characters, but it's bloodless.

Cirque is a harmless bit of fluff with a very cool look, but there's just never enough bite.

Making a vampire movie without any bite is like removing guns from a Western.