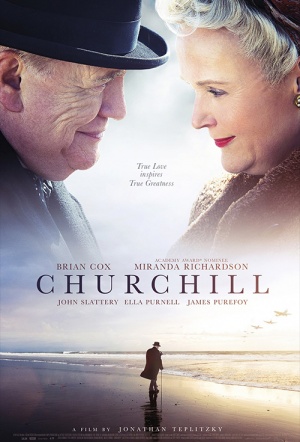 Brian Cox, Miranda Richardson and John Slattery star in this ticking-clock thriller following Winston Churchill in the 24 hours before D-Day.

As allied forces stand on the south coast of Britain, poised to invade Nazi-occupied Europe, they await Churchill’s (Cox) decision on whether the invasion will actually move ahead. Fearful of repeating his mistakes from the beaches of Gallipoli, exhausted by years of war, plagued by depression and obsessed with fulfilling historical greatness, Churchill is also faced with constant criticism from his political opponents; General Eisenhower (Slattery) and Field Marshal Montgomery (Julian Wadham).

Only the unflinching support of Churchill’s brilliant, unflappable wife Clementine (Richardson) can halt the Prime Minister’s physical and mental collapse and help lead him to greatness.

Brian Cox gives good Churchill. He has the acting chops, he has the body shape, and he really knows how pull that bulldog face. He has jowls and he knows how to use them. But creating the facsimile only takes you so far, the key to a good biopic is bringing new intel to the table, illuminating shades of historical grey hitherto hidden by the broad strokes. On that score this film makes the grade in spades, at least for those whose book shelves don’t groan with military histories.

So full of movie clichés and high melodrama that it's sometimes hard not to giggle - and one should never laugh at the prime minister.

The movie's ambition is the good news. The bad news is that it is a hash, choosing to jumble the historical record and frame a Churchill bout with depression against the D-Day invasion of France by Allied forces.

The script is eventually undone by its cliches, one or two of which are shamelessly sentimental, but Cox and Richardson make it all worthwhile.

You can certainly argue just how speculative this film version of Churchill is as history. But Cox's performance cannot be faulted. It's a master class in acting.

The human edges are what really set this higher than the usual fare.

A superb look at iconic statesman Winston Churchill's torturous days leading up to the pivotal D-Day landings of June 6, 1944.

Cox aside, this pedestrian drama is hobbled by too many monodimensional characters and too much overly explanatory dialogue that feels like a dry high school history lesson...