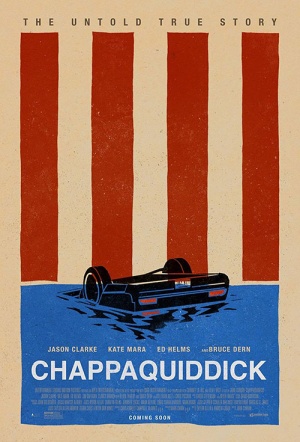 Mid-1969, Senator of Massachusetts Ted Kennedy hosts a party on Chappaquiddick Island - a gathering of single women and mostly married men. Late that night, Kennedy drives away with a young woman, and has a serious car accident that he fails to report for ten hours. That crucial and suspicious period of time is fleshed out by this film, tracing the attempts of the last surviving Kennedy brother to manage the ensuing scandal.

It’s tough examining tawdry historical political scandal in the Trump era, much like how modern scepticism about the honesty of governments robbed The Post of some of its impact. Throwing House of Cards alum Kate Mara into the mix as the victim of Senator Teddy Kennedy’s negligence here invites further comparison to that show’s constant ante-upping in moral turpitude.

"Chappaquiddick" is exactly what you want it to be: a tense, scrupulous, absorbingly precise and authentic piece of history - a tabloid scandal attached to a smoke-filled-room travesty.

Whether or not events actually unfolded this way, the story the film tells is an interesting and complicated character study, with something to say about the corrosive effects of power and privilege on both the innocent and the guilty.

The push and pull of this movie is really between the lead character and the audience. One moment we feel compassionate: he wants to do the right thing. The next moment he's gone down the cover-up rabbit hole and is an irredeemable swine.

A fascinating look at an under-examined, key moment in American history.

In the final analysis "Chappaquiddick" is the story of a weak man. Maybe someone who had deep-seated reasons for that weakness, but still a not particularly appealing individual whose actions frustrate rather than draw us in.

Everything is methodical, it covers most of the bases, but passion and vitality are crucially missing from director John Curran's treatment.

Very well-directed and has enough appeal to justify audience curiosity.

When you consider the films about real-life politicians we usually get, Chappaquiddick is surprisingly bold even if its modest approach belies its striking statements.