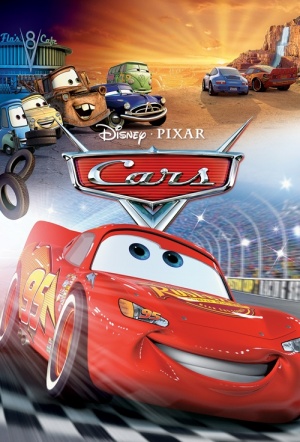 From Pixar/Disney, the tale of a cocky, success driven young race car Lightning McQueen (Wilson) who, on his way to a Championship race in California, crashes his, um, himself, in the sleepy town of Radiator Springs - destroying some of the inhabitant's belongings. This is no good say the townsfolk, and to make amends he is ordered to stick around for community service.

Despite stars in his eyes, McQueen resigns to hanging in Radiator Springs where he meets the locals. The friendships he forms, teach him there are more important things in life than trophies and accolades.

Periodic bursts of cleverness brighten the festivities, but they're too few and far between, and the trademark humor that appeals to adults and kids often misfires...

What Cars teaches is how to blend brash comedy with technical astonishments so that each enhances the other. I can't imagine who wouldn't want to test-drive this one...

While Cars renders its vehicle-only world with obvious affection and detail, it also feels too laboured in its storytelling...

It might not be way up there in "The Incredibles"/"Finding Nemo"/"Toy Story" stratosphere, but the charming "Cars" is nevertheless a thoroughly pleasant way to mark Pixar Animation Studios' 20th anniversary...

Judged against previous form, this is not Pixar firing on all cylinders, lacking the sophisticated comedy we’ve come to expect. Judged against fare from other studios, however, it’s a triumph...

The script, usually Pixar's secret weapon, is a surprisingly lame affair that substitutes endless automotive puns for real wit. The only bright spot in the tedium is Paul Newman, on magisterial form as a retired racer with a dark secret..