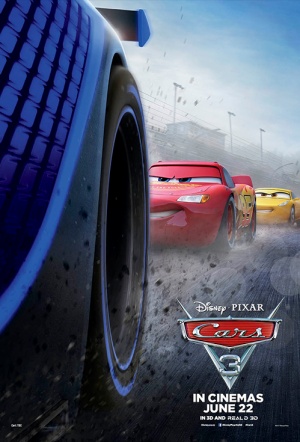 Lightning McQueen (Owen Wilson) is back and determined to prove himself to a new generation of race cars in Disney/Pixar's third instalment in the Cars series.

Blindsided by a new generation of blazing fast racers, the legendary Lightning McQueen is suddenly pushed out of the sport he loves. To get back in the game, he will need the help of an eager young race technician with her own plan to win, inspiration from the late Fabulous Hudson Hornet, and a few unexpected turns. Proving that #95 isn't through yet will test the heart of a champion on Piston Cup Racing’s biggest stage.

The first Cars film won’t be at the top of anyone’s list of favourite Pixar films while Cars 2 is almost guaranteed to be at the bottom. This third film pretends that sequel never existed, switching back to what worked in the original. However, Cars 3 has a trick up its glovebox that makes this film the best of the series.

"Cars 3" is very much a tale of mentorship, of learning how to give up your ego in order to bolster someone else's. As such, it's touching in a pleasingly formulaic, pass-the-torch way.

It's all well and good for the under-12s, but this movie never packs the kind of emotional punch we know Pixar is capable of.

If you can roll with it, the movie is both breezy fun and a pain-free life lesson delivery vehicle.

Cars 3 does just enough, late in the day, to be considered an adequate sequel to Cars.

In "Cars 3," champion racer Lightning McQueen grapples with the possibility that his glory days are behind him - an uncomfortably apt metaphor for a franchise that has run out of gas.

The end goal this time out isn't just to sell a few more toys and Lightning McQueen lunchboxes. It's actually tapping into something deeper than a corporate bottom line.

This warmly sentimental G-rated film about facing new realities and recapturing lost dreams has, despite its relatively adult story line, a beguilingly effortless feeling to it, as if it had nothing to prove. Clip ('The Next Generation')