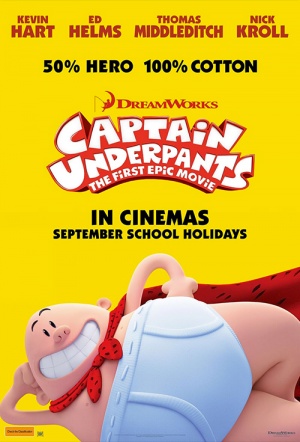 Ed Helms, Kevin Hart and Nick Kroll star in this DreamWorks animated feature based on the children's novel series by Dav Pilkey. Directed by Rob Letterman (Shark Tale) and written by Nicholas Stoller (Yes Man, Get Him to the Greek).

"Captain Underpants" isn't out to be more than a trifle; that's part of its appeal. It's not so much potty-mouthed as it is a potty-minded kiddie burlesque, one that finds the supreme innocence in naughtiness.

Funny, absurd and smart-stupid enough to keep everyone happy.

Just when your brain's starting to ache, the film chucks in another subversive crack about America's failing school system, or a genuinely hilarious sock-puppet-animated flashback.

The best animated movies for children are sublime. This one generally settles for noisy, though it throws in a positive message at the end.

It's a thoroughly entertaining and likable film: two qualities that look easy but are anything but. Captain Underpants deserves a franchise.

For a film that is almost entirely based on toilet humour of the fourth grade reading level, you may be surprised that there is some sage wisdom to be found in the saga of Captain Underpants.

In the absence of a sturdier storyline and more dimensional characters, the manic, rapid-fire delivery, while yielding some well-deserved laughs, proves more exhausting than inspired.

Silly and aimed squarely at the younger crowd, Captain Underpants has enough spirit to be entertaining. Just don't expect it to work all the time.