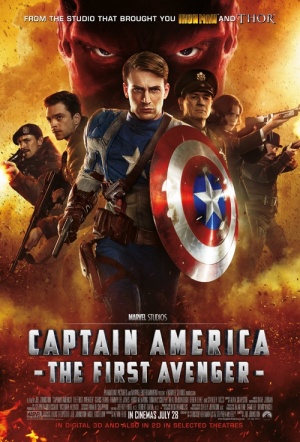 Action-adventure adaptation of the Marvel comic series, set in 1942, directed by Joe Johnson (The Rocketeer, The Wolfman).

After being deemed unfit for military service in WWII, a scrawny Steve Rogers (Chris Evans from Fantastic Four) volunteers for a top secret science project that turns him into Captain America, a super-soldier dedicated to defending justice and democracy against the Nazis.

The Captain's strength, endurance, agility, speed, reflexes, durability and healing are at the highest limits of natural human potential. The WWII confrontations lead to the ultimate foe in Red Skull (Hugo Weaving, The Matrix), Hitler's treacherous head of advanced weaponry, whose own plan for world domination involves a magical object known as The Tesseract.

As Marvel heroes go, Captain America must be the most vanilla of the lot.

The final piece of the Avengers jigsaw falls efficiently into place: decent acting, decent action, a few too many “we’re all heroes inside” platitudes. But it’s no star-spangled sick-maker, either.

It goes without saying it's preposterous. But it has the texture and takes the care to be a full-blown film.

Mission accomplished, fairly enjoyably yes, but that's about it.

Charming, handsome and full of pep – all 70 year-old Cap lacks is a knockout blow. Still, Johnston should be saluted for old-fashioned heart in a cynical age, while Marvel should be confined to barracks for cynical marketing.

If you like your comicbook action pulpy and sweetly old-fashioned (our hero has never been kissed so don't expect much raunch) this may keep you entertained until the next superhero flick rolls along. Which should be any second now.

For the most part, it manages to balance laughs, genuinely rousing moments, and a fully packed agenda into something fleet enough to keep running under the weight of its rich ambitions.