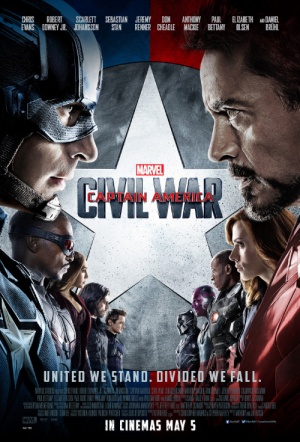 The entire Avengers initiative is torn into two opposing sides in this closing chapter to Disney Marvel's Captain America series. The directors of The Winter Soldier return, as does Chris Evans as Steve Rogers. The cast of Marvel characters joining them include Robert Downey Jr. as Iron Man, Scarlett Johansson as Black Widow, Don Cheadle as War Machine, Paul Rudd as Ant-Man and introducing Tom Holland as Spider-Man (marking the webbed one's first appearance in this Marvel universe).

After a major incident involving the Rogers-led Avengers results in collateral damage, political pressure mounts to install a system of accountability. This new status quo fractures the Avengers, resulting in two camps - one led by Rogers and his desire for the Avengers to remain free to defend humanity without government interference, and the other following Tony Stark's surprising decision to support government oversight and accountability.

I would need 13 TED speakers and several flowcharts to detail every single thing going on in Captain America: Civil War. With a rising hero count close to bursting point, you’d be forgiven for thinking you were watching the third Avengers film. But as overwhelming as all this seems, the story stays incredibly focused on what defines Steve Rogers: never ignoring a civilian’s life, remaining true to a global view of freedom, and acknowledging the consequences of doing what you believe is right.

Remarkable for its dramatic coherence and thematic unity as for its dizzyingly inventive action sequences.

This is Marvel at their best: a pacey, intelligent super-sized blockbuster and a roaringly fun night out.

This is the cinematic superhero showdown you've been waiting for.

It’s a huge aspartame rush of a film: a giant irresistible snack, not nutritious, but very tasty.

Ticks every box I've got and then some.

No doubt this is the kind of high note Marvel would like to continue indefinitely across the franchise.

Builds upon the plotlines of previous Avengers outings, bringing together known marquee quantities and introducing the Black Panther and a new Spidey in winning fashion.

Matching its blockbuster scale and spectacle with the smarts of a great, grown-up thriller, Captain America: Civil War is Marvel Studios’ finest film yet.